A better way to divorce - Resolution 2014 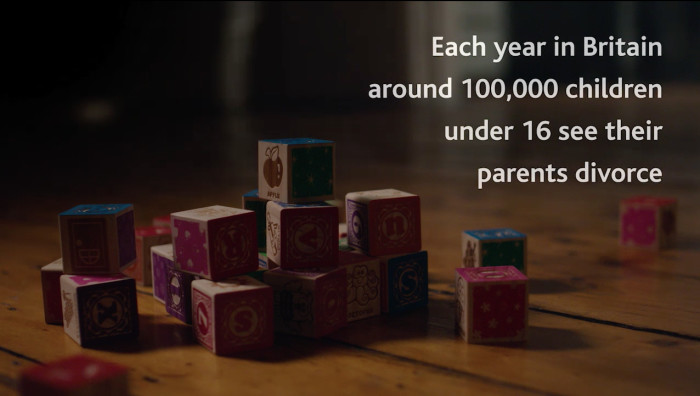 As part of not for profit organisation Resolution’s third Family Dispute Resolution Week (24th - 28th November 2014), content agency blueprint.tv has created a hard-hitting film “A better way to divorce” which highlights the effects of separation on a couple’s children, family, friends and colleagues. blueprint.tv has also produced infographics on key statistics and a digital strategy to support the launch of the content online.

Resolution’s Family Dispute Resolution Week this year particularly raises the concerns over the effects of separation on teens and young adults. Resolution commissioned a survey of 14 - 22 year olds which has revealed that young people feel their exam results are suffering as a direct result of parental break-up. The research also found that parental separation is leading young people to turn to alcohol and skipping lessons, while some admit to experimenting, or thinking about experimenting, with drugs.

Mungo Park, Managing Director of blueprint.tv said: “blueprint.tv is glad to have been able to contribute to such an important cause and we have thoroughly enjoyed working with Resolution to produce this content, including a hard-hitting film and a digital strategy, which will increase awareness for the Family Dispute Resolution Week. Divorce is a difficult time for not only the couple involved but also for the families, friends and colleagues around them. If the process of divorce or separation can be completed with minimal disruption then surely this is a message that needs to be heard.”

Jo Edwards, Chair of Resolution, said: “Each year around 100,000 children under 16 see their parents divorce. Almost half of all break-ups (48%) occur when there is at least one child in the relationship, and with 230,000 people in England and Wales going through a divorce each year (and many more separating), this is an issue that affects hundreds of thousands of families in Britain every year. Resolution’s new findings show the wide-ranging impact of divorce and separation on young people and underlines just how important it is that parents going through a split manage their separation in a way that minimises the stress and impact on the entire family, especially children, otherwise their exam results could suffer. Divorce and separation is always traumatic, but there is a better way to deal with it.”

ComRes interviewed 4,031 GB adults online between the 26 September and 2 October 2014 and 502 young people with experience of parental separation or divorce between the ages of 14-22 between 19 September and 7 October 2014. For the survey of adults data were weighted to be representative of all GB adults aged 18+; for the survey of young people, data were weighted to be representative of all young people in Great Britain aged between 14 and 22. ComRes is a member of the British Polling Council and abides by its rules. Full data tables are available at www.comres.co.uk.